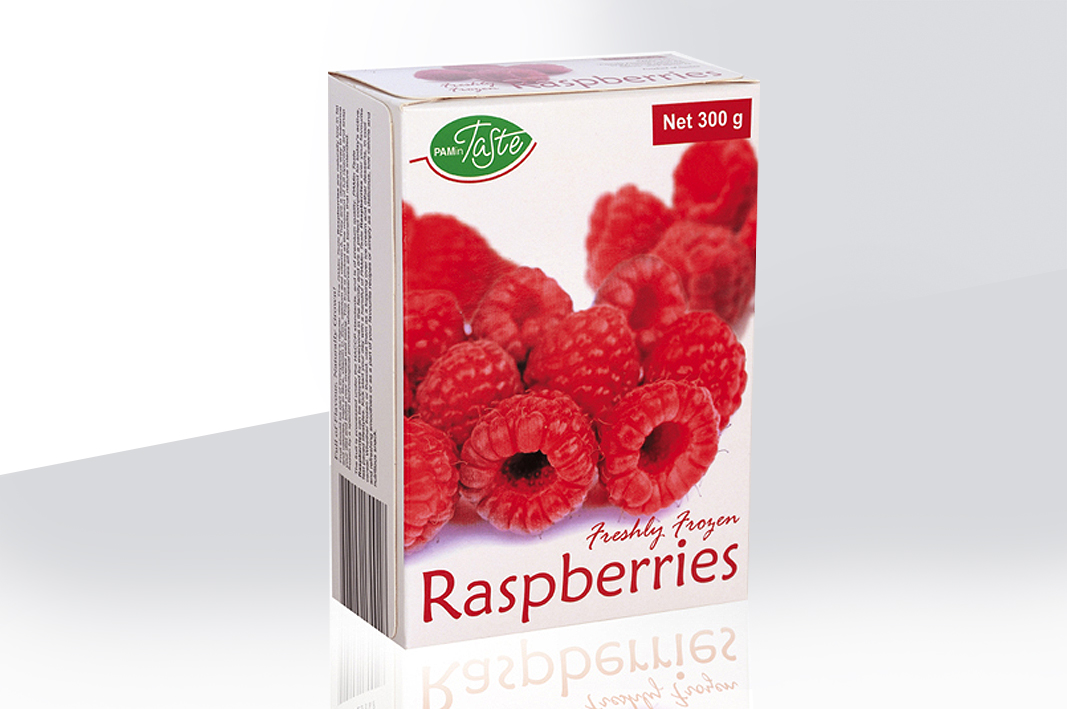 All IQF fruits can be packed in various types by clients request.

Do you know what happens when you combine ideal climate, fertile soil, high-quality seed and the years of experience of Serbian farmers?

The answer is quite simple – the most tasty and most fragrant raspberries! Welcome to Serbia, the capital of the “Red Gold”.

It all began more than three decades ago when a few families decided to try producing this delicious red fruit. Of course, at the time, nobody knew that Serbia would end up at the very top of raspberry producing countries. Nobody even dreamed that people all over Europe would be talking of their specific taste and that people wide across Asia would enjoy their intoxicating fragrance.

It was also unimaginable that its vibrant, red colour would be admired by the Americans. Still, it happened. Raspberries have, in time, become one of the most prominent Serbian brands.

The answer to the question of how the Serbian raspberries managed to reach the very top and what makes them so special, is, as we’ve already said, very simple.

The unique taste and recognizable scent of the Serbian “red gold” can be attributed to the rich and fertile soil, but to them being grown in small family farms as well. In Serbia between 80 and 100 thousand tons of the most delicious raspberries are hand-picked each year.

The raspberries from Arilje, Serbia are a synonym for quality and refined taste. This stands for not only Serbia but the whole world as well. This small town is located in the mountain regions of west Serbia and is adorn by many natural riches. Near to Zlatibor mountain, Arilje is “cut” by the Moravica, Veliki Rzav and Mali Rzav rivers. It is one of the cleanest and healthiest environments in Serbia.

The benefactory and healing properties of raspberries are becoming an increasingly talked about subject. There are more and more (popular) claims that this fruit can prevent the spreading of lung, oral cavity, esophagus, blood vessel, prostate, cervical and other types of cancer. Many studies have been undertaken to find more about the effects that raspberries have on health.

What has been proven so far is that some of the components of this fruit do have a positive effect in protecting cells from damage, aging and various forms of cancerous diseases. And besides all that, you’ll enjoy the taste of Serbian raspberries!

Raspberries are grown in every part of Serbia.

Okay, maybe not every part. But, the fact of the matter is that this fruit was characteristic only for west Serbia, and now it is being grown in places it wasn’t before. The first raspberry farms appeared in Vojvodina and in the vicinity of Svilajnac. The number of raspberry farms in western Serbia is also in the increase. The reason for this lies in the huge interest and demand for Serbia’s “red treasure”.

Serbian farmers have some specialities in the way of growing raspberries, adopted by years of experience. The raspberry rows have only two central main steel wires, and when raspberries have grown, the farmers just turn cross-lattices to make side supporters tied by rope. They use plain rope, to support bearing branches. In early spring season they have a lot of pruning to do. Fertilizing and hoeing also require much of manual work, although a most of the work nowadays is done by cultivator.

People from all across the globe are determined to enjoy the taste of Serbian raspberries. Because of that, each year more and more acres are held up by raspberry farms and more and more of tons of this fruit are produced..

If you haven’t already, you have to try…

You still haven’t tried Serbian raspberries? That’s a mistake you have to rectify as soon as possible! Even though they’re extremely tasty on their own, we feel obligated to tell you about some more raspberry specialties. In Serbia, the No.1 product is slatko made from raspberries. If you happen to find yourself in this fruit’s capital, do not pass on this homemade delicacy!

There’s also the famous raspberry jam, as well as juices and syrups which are made in a 101 way. Cake-lovers, worry not! Serbian women are very skilled in making such treats, as well as pies, fruit salads and even ice-cream from the sweetest, reddest raspberries.Now you know one more thing you have to add to your list of “things you have to do and try in Serbia”!

Raspberries belong to the rose (Rosaceae) family of plants, which houses some of the world's most beloved fruits including apples, apricots, blackberries, cherries, loquats, peaches, pears, plums, and strawberries. Almonds also belong to this diverse family of plants.

There are over 200 species of raspberries, all belonging to the scientific genus called Rubus. Fortunately, however, many of the raspberry species that are grown commercially can be placed into one of three basic groups: red raspberries, black raspberries, and purple raspberries..

Like their name implies, mature red raspberries can typically be identified by the shade of red in their color, although this red may veer toward the pinkish side. Among all commercially cultivated raspberries, Rubus idaeus or European red raspberry is among the most common.

Raspberries are an outstanding source of phytonutrients, and provide us with dozens of anthocyanins, flavonoids, stilbenoids, phenolic acids, tannins and lignans. They are an unusually concentrated source of ellagitannins (like ellagic acid), cyanidins and pelargonidins. Raspberries are an excellent source of vitamin C, manganese and dietary fiber. They are a very good source of copper and a good source of vitamin K, pantothenic acid, biotin, vitamin E, magnesium, folate, omega-3 fatty acids and potassium.

What's New and Beneficial About Raspberries?

One of the most fascinating new areas of raspberry research involves the potential for raspberries to improve management of obesity. Although this research is in its early stages, scientists now know that metabolism in our fat cells can be increased by phytonutrients found in raspberries, especially rheosmin (also called raspberry ketone). By increasing enzyme activity, oxygen consumption, and heat production in certain types of fat cells, raspberry phytonutrients like rheosmin may be able to decrease risk of obesity as well as risk of fatty liver. In addition to these benefits, rheosmin can decrease activity of a fat-digesting enzyme released by our pancreas called pancreatic lipase. This decrease in enzyme activity may result in less digestion and absorption of fat.

You'll get significantly more antioxidant support by purchasing raspberries that are fully ripe. Recent studies have measured the total phenolic content, total flavonoid content, and anthocyanin content of raspberries harvested at varying stages of ripeness (from 50% to 100% maturity) and greatest overall antioxidant benefits were associated with full ripeness of the berries. Although it's possible for raspberries to ripen after harvest, this fruit can be highly perishable and can mold quite easily at room temperature. So your most risk-free approach for getting optimal antioxidant benefits from raspberries is to purchase them at full maturity, keep them refrigerated at all times at temperatures between 35-39°F (2°-4°C), and consume them very quickly (within 1 to 2 days after purchase).

As raspberries are very delicate, wash them very gently, using the light pressure of the sink sprayer if possible, and then patting them dry. They should be washed right before eating or recipe preparation so that they do not become water-soaked and are not left at room temperature for too long. Do not use any berries that are overly soft and mushy unless you will be puréeing them for a sauce or coulis.

Quality of the products, packaging and many years of industry knowladge allows us to compete on European, Canadian and Australian markets.

Organic Blueberries taste great, and deliver more antioxidant goodness than most other fruits. Kick start day with it and enjoy!

PAMin Taste Blackberries can be enjoyed by everyone in the family and are a perfect compliment for today´s active lifestyles.

The PAMin Taste Berries in Love are a mix of four most loved berries, raspberries, blueberries, strawberries and blackberries.

Rich in vitamins, antioxidants and fiber, raspberries are a delicious fruit with many health benefits. Antioxidants rich ...

A heavenly combination: our organically grownberries offer a gorgeous medley of sweet, juicy flavor. In our pack are wild...

Whether you like eating raspberries on their own, mixed with yogurt, on your toast or baked into a muffin...